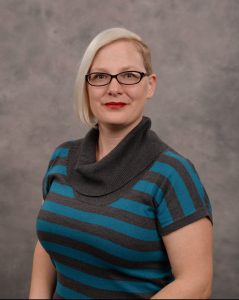 Growing up in Jefferson, Iowa, Shara Bradley wasn’t read to much as a child. She was enrolled in special education courses for reading and spelling throughout elementary school.

“If I annoyed my older sister enough, she would give in and read to me, but that’s it,” Shara said. “I hated reading and it wasn’t until college that I began to read for fun. As an adult, I realized that my main problem with reading as a child was that I found it utterly boring and therefore could not retain anything I read.”

It wasn’t until she began to read science fiction/fantasy and comic books that she loved reading.

Because she feels like she missed out being read to as a kid, she makes sure to read to her two boys, a 4th grader and preschooler, every single night.

“I’m pretty sure I am overcompensating,” Shara said. “I really want my kids to enjoy reading, and they do. “

Often times, Shara’s oldest son gets himself into trouble because he can’t put a book down and go brush his teeth. Her youngest gets very upset if they don’t have the chance to get a bedtime story in.

“And they BOTH have been caught hiding flashlights under their pillows so they could stay up late reading!” Shara said.

In 2006, Shara graduated from the University of Northern Iowa with a Bachelor’s degree in Psychology. She began working in the nonprofit sector, and has worked mainly with children or disadvantaged populations over the past 12 years.

One of her accomplishments was developing an after-school enrichment program for children that lived in a subsidized housing complex. Shara ran the program for 6 years.

“I like being a part of a program, doing the work, and getting it to the point where it’s very self-sufficient,” Shara said. “You really just have to stand back and watch something run itself and do what it’s intended to do, which Everybody Wins! Iowa does.”

Since November 2017, Shara has been the EWI Site Coordinator for the Moore lunch and after-school programs on Mondays, Children and Family Urban Movement after-school on Tuesdays, and the Oakridge Neighborhood program on Tuesday evenings.

It’s typical for EWI site coordinators to have started out as mentors, which was exactly Shara’s case. She was a mentor in the spring of 2011 and summer 2015.

On top of site coordinator, Shara also acts as a sub in the Des Moines School District when needed.

“As a sub, I’ve heard teachers say they appreciate our program and think the students are improving,” Shara said.

Shara wanted to share a brief success story about a fourth grader at one of the after-school programs she coordinates.

When the student met her new mentor, it was the same story initially, but eventually the pair started to hit it off.

“This student is an English Language Learner,” Shara said. “By coincidence, her mentor had been to her home country for a few weeks and knew a little bit of her native language. Now, the student looks forward to it and said to after school staff really enjoys it.”

Thank you, Shara, for all of your hard work. We appreciate you being a part of the Everybody Wins! Iowa team.