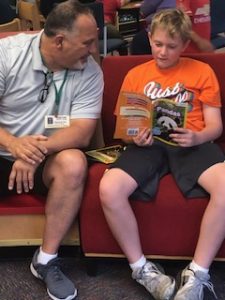 Ray Yori started reading with EWI because of his involvement with our partner United Way of Central Iowa and The Real Men Read program. Real Men Read is a program with United Way in which men read aloud once a month to a classroom of students and engage them in conversations and activities centered around the book. He enjoyed his experience reading with Real Men Read so much that he wanted to try mentoring also. He began mentoring in the Power Read Program in the 2018-2019 school year at Lovejoy and reads at Crestview this summer. He also has continued his involvement with Real Men Read.

In addition to his work with EWI and Real Men Read he holds a BBA in management from Iowa State University. He is an underwriter for Farmers Mutual Hail Insurance Company.

Yori says that he,“chose to be a mentor because I believe it is a way for me to give back to the community. I think the program is important and the goal is a worthy one. I continue to mentor because it is fun and the children are appreciative and seeing the change over a year is amazing.”

Yori read with Kindergarteners in 2017-2018 at Carver Real Men Read. One of his favorite stories from Real Men Read is, “The kindergarteners were so full of life. First book we read was about space and how hot some of the planets are. Somehow it turned into ice cream melting and everyone’s favorite ice cream. You never know what the kids are going to latch onto.”

Ray says that, “mentoring this year was great. By the end of the year my six-year old wanted to read to me. That confidence in his own reading ability was a huge change from the beginning of the year.”

His advice for future mentors is to, “give it your best effort. Come with a positive attitude. You never know from week to week what might happen but you might just be a bright spot for a young child each week -and guess what- they may end up being a bright spot for you too.”

Everybody Wins! Iowa thanks Ray for his dedication and passion for the program.