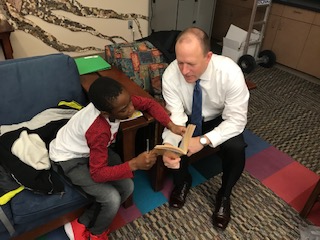 Steve Walker has been a mentor with Everybody Wins! Iowa since 2016. He began mentoring at Cattell Elementary in Des Moines and has moved to Hillside Elementary in West Des Moines.

Steve is a Commercial Lender with Veridian Credit Union. He received a Bachelor’s Degree in Business from Grandview College (Grandview University). Outside of work and mentoring he “enjoys watching hockey, playing golf and spending time with family.”

When asked why he decided to be a mentor he said he was very surprised and concerned when he learned what the low literacy rates in K-6 grades in our communities. To Steve giving an hour once a week to a make a difference and provide encouragement to a student seems like a no-brainer. He enjoys the program because it is a way to give back to the community which has given us so much.

One of his favorite stories that has happened in his time being a mentor is that WOI-TV interviewed him and his student about their mentoring experience. He says that, “My student, Nathiyus was nervous but ended up nailing the interview and now tells everyone we are “stars”.”

His advice to future mentors is that “it’s very easy to take one hour out of your week to make a huge difference, provide encouragement, and become a positive role model in a kiddo’s life.  Everybody Wins! Iowa is a great organization and everyone involved, from the staff to the school coordinators and volunteers, are all so very friendly and openhearted. Take volunteering a step further and become a mentor!”

Everybody Wins! Iowa thanks Steve for his passion and dedication to the program.