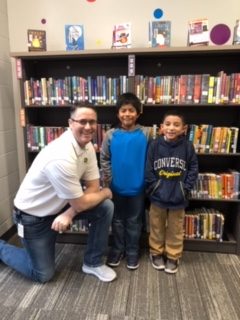 On Wednesdays we have a very dedicated group of mentors from John Deere Financial that mentor with us at our program at Findley. This program is sponsored by John Deere Financial. One such mentor is Mark Hamilton. Mark reads with two students at this program. One of his students is Benneth. This student just recently moved to Iowa and comes from a Spanish speaking home and doesn’t speak much English. Hamilton speaks Spanish as well so he has incorporated this skill into his mentoring experience.

Mark is in his third year of mentoring at Findley. He said that he started mentoring because he, “saw it as an opportunity to contribute to the community. I have continued as I have seen how beneficial it is for the children and I really enjoy the interactions with them.”

Outside of mentoring he spends, “a large part of time with family and children. He enjoys hiking and other outdoor activities as well as watching sporting events.” He has a BA in Accounting and Management Information Systems as well as an MBA in Finance.

Hamilton commented that he reads, “with him and his classmate in both English and Spanish. They have both enjoyed this. Benneth reads very well in Spanish and is learning to read in English. In the short few months I have seen a real growth in Benneth and his ability to communicate and read in English. I believe Benneth enjoys this as most of his day he is learning in English.”

Mark gives credit for Benneth’s growth and confidence in his English to his classroom teacher. “He truly is much more comfortable understanding and speaking English than he was at the beginning of the year.”

Mark also shares that since he utilizes both Spanish and English in his book selections his students, “have become a bit competitive in their reading. They challenge one another to improve each time.” He says he has been working to make sure they are working on improving while at the same time supporting one another.

He concludes by giving some advice for current and future mentors. “Being there to help these children shows them they have many people around them that care for them and their well-being.” Mark also notes that he feels as though he has learned just as much from what his students share with him which cause him to “reflect and learn.”

Everybody Wins! Iowa thanks Mark for his dedication to his students and lending his skills to help improve their world.