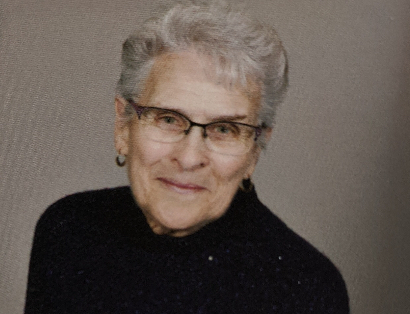 Roberta “Bert” Rush, who has been a Power Read mentor at River Woods Elementary for three years, is our Mentor of the Month for April. Bert grew up in the southwest side of Des Moines and has lived there ever since. She attended Park Avenue Elementary School and Abraham Lincoln High School, graduating from there in 1953. Bert was married in 1959 and has four children, seven grandchildren, and two great-grandchildren. One of Bert’s daughters is a mentor, as well, and she introduced Bert to the program.

Bert’s reading with two students this year. KeAujenae  is in  2nd grade and Bryjon is in 3rd grade. “I was told at the beginning that Ke Aujenae did not like to be asked to read. At the start of the program, I made sure to ask whether she would like me to read to her or her to me. We started with me reading to her, and  then eventually she would pick a book and hold it like she was reading to me. She would look at the pictures and make up some of the best stories,” Bert said. She also mentioned that she and Ke Aujenae would play “school” while reading, with Ke Aujenae taking the role of teacher. She feels that Ke Aujenae has shown improvement from the beginning of their time together.

Bryjon has also shown growth during the program. “They explained Bryjon didn’t talk much. Some days he was really reluctant to come to Power Read  because he was having a bad day. When he would come into the room, I was always happy to see his smile, and we would talk a lot,” Bert said. She discovered that Bryjon had a fondness for word puzzles, and after finding some in the newspaper, Bert cut them out and brought them to Power Read so he could work on them. Bryjon also had fun sharing his knowledge of comic book characters, which Bert would read up on at home afterwards. “‘Never too old to learn,’ is my motto,” she said.

Bert’s involvement at EWI has been a source of joy for her. “I definitely feel that the program is very wonderful and beneficial. Marty Katz, who is our site coordinator, does such a good job. And, all of the other mentors I have the pleasure of working with also feel this program is great, as well!” she said.

Thank you for your service, Bert! We hope you will serve as a mentor in Power Read for many more years to come.